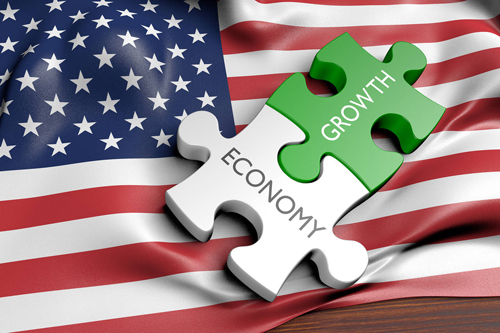 What’s Ahead for the Economy

Ok, so no one has a crystal ball. But, we can take some pretty good guesses at what’s on the horizon. Of course, much of it depends on some critical things going on nationally and globally. One thing’s not going away any time soon, the nation’s ever increasing ballooning debt which will be something that’s going to weigh very heavily on the economy. There are many other factors that are going to assert their conglomerate effects on us.

Economists, executives and investors are reading the 2020 tea leaves with heightened scrutiny in an effort to divine what this year holds for the U.S. economy and for ordinary Americans. As per an NBC report recently, we can glean some important information. Here are the events these soothsayers purport are most likely to impact and potentially reshape our economic trajectory.

Higher interest rates also have implications for how much the U.S. Treasury — in other words, taxpayers — pays to service the nation’s swelling debt load.

“One thing that’s remarkably forgotten at the moment is our fiscal situation in terms of deficit and debt. Nobody wants to talk about that right now,” North said. “If you look at the Congressional budget projections, the debt-to-GDP ratio keeps creeping up. Nobody has plans to cut back on the debt for all that money we’re borrowing.”

“I view it like climate change,” said Mark Zandi, chief economist at Moody’s Analytics. “We know it’s a problem if we don’t do something about it. We don’t know precisely when it will be a problem or how it will manifest itself. It’s a big deal. It’s just not a big deal today.”

Zandi pointed out that the unpredictability of when, where and how this will emerge as a headwind is precisely what makes it such an ominous threat. “At some point down the road, it’s going to be something that’s going to weigh very heavily on the economy. It’s corrosive. It’s going to wear down the economy over time.”

Trade Tensions with (and beyond) China

Although the president announced on Tuesday that he would sign a phase one trade deal between the U.S. and China at the White House on Jan. 15, this by no means takes worries about tariffs and supply chain disruptions off the table, experts say, especially with the U.S. withdrawing from large multilateral agreements and ceding its position as de facto leader in global trade.

“The real thing that’s going to change the world over the next decade is the U.S. is no longer the mainstay of the global free trading system,” McMillan said.

“As we look forward into 2020, I think the trade wars are either resolved or they accelerate… we’ll have to see how that unfolds,” Heider said. Although Great Britain is not a major trading partner of the U.S., Brexit also could be potentially disruptive, particularly if the country leaves the European Union without a plan in place. “Those are both unknowns,” he added.

A number of market observers express doubt that the current truce between the U.S. and China is more than a pause, and suggest that real or threatened tariffs could continue to cast a chill on business investment in 2020.

“I wouldn’t be surprised if those tariffs came back into play,” said Dan North, chief economist at Euler Hermes North America. If the White House revisits its recently rescinded plan to levy sanctions on nearly all consumer goods coming from China, spending and confidence would drop. “That’s where it will hurt the economy,” North predicted.

In the past, Trump has pulled back from nearly-complete trade deals over the perception of being unfairly treated — and could very well do so again, observers note.

“The vast majority of the phase one is really centered on agriculture, but the question remains, what’s the enforceability mechanism here? It’s really unclear at this point,” said Lindsey Piegza, chief economist at Stifel Fixed Income.

Beijing has pledged to operate more fairly, but whether or not that promise is kept remains to be seen, Piegza said. “They have time and time again promised to crack down on that with no positive outcomes,” which could derail the prospect of a more significant deal in the future.

The Mainstreaming of Cryptocurrencies

Facebook’s introduction of its Libra cryptocurrency platform is a shot across the bow to gatekeepers of traditional financial and currency systems that will continue to reverberate, said Lawrence White, an economics professor at New York University’s Stern School of Business.

“We’ll only know in the next couple of years if it turns out to be a non-event, but the Facebook Libra announcement certainly attracted a great deal of attention,” he said.

Although lawmakers in the U.S. have broached regulations for cryptocurrency, and Switzerland’s finance minister recently declared that Libra had “failed,” White maintained that cryptocurrencies are going to be a big topic of interest — and regulatory scrutiny. He pointed out that people who dismissed Libra’s antecedent as a passing fad were proven wrong.

“You wouldn’t have seen the Facebook Libra announcement had there not been the experience of and attention being paid to Bitcoin,” he said.

“Governments are thinking, how do we regulate this? Should we be creating our own digital currencies?” The existence, albeit nascent, of hundreds of other would-be contenders in the space show that cryptocurrencies are going to grow in both visibility and real financial impact, White predicted.

Many economists hold the view that ultra-low interest rates have helped propel the bull market into unprecedented territory, but that could change in 2020.

“The biggest risk to me is inflation, and that’s not a risk most people are looking at. The CPI figures are starting to creep up a little more,” said Mitchell Goldberg, president of ClientFirst Strategy. “I don’t know if the Federal Reserve will be able to hold off if inflation rises.”

In spite of the president’s frequent complaints about his handpicked Fed Chairman Jerome Powell, Goldberg said he expected Powell to respond to financial, not political, signals. “I think eventually if Jerome Powell needs to raise rates, he will,” he said.

This has potentially market-shifting implications for highly leveraged companies. “The corporate debt situation, because of where rates are, is something we have to be mindful of,” said John Lynch, chief investment strategist at LPL Financial. “You have half the Bloomberg Barclays investment grade index literally a step away from junk.”

Because interest rates are so low, companies have been able to take on debt loads that would otherwise overwhelm them — which could happen if rates rise, Lynch said.

This could also create a downward spiral for indebted households, Piegza said. “I don’t know if we ever got to the point where consumers really cleaned off their household balance sheets enough. The way the U.S. economy has grown out of recession is by the consumer taking on new amounts of debt.” With corporate appetite for investment at a trough thanks to uncertainty over trade issues, consumers are the primary force still keeping the economy in drive. “Right now, we’re relying on the consumer in terms of discretionary purchases but already we’re starting to see some red flags,” she said. “This may be a precarious position.”

Ultimately, the final influence for 2020 will be the elections. Economists say if the 2020 election leads to a divided government like the current one, little will change in a meaningful way for businesses and investors. If a single party ends up controlling the White House and both chambers of Congress, though, the economic impact could be greater.

“Equity markets have traditionally performed better under Democrats than Republicans when you average it out on a long-term basis, which defies what most people believe are facts but… financial markets are terrified of the far left wing of the Democratic Party,” said Joseph Heider, president of Cirrus Wealth Management. “If Elizabeth Warren or Bernie Sanders look like they could be the nominee of the Democratic Party, I think that could have very negative impact on financial markets.”

Both of these candidates’ pledges to rein in big companies and raise taxes on corporations and the wealthy would hit banking, finance and tech sectors — areas that buoyed indexes in 2019 — especially hard. “You never know what would happen, but I don’t think that would be a positive outcome for the financial markets,” said Heider.

“If the Republicans take back the House and maintain control of the Senate and we have a second term for President Donald Trump, I think we get a second round of tax cuts,” said Brad McMillan, chief investment officer for Commonwealth Financial Network.

He argued, though, that a Democratic president and Congress wouldn’t be as destabilizing as some market observers fear. “On one hand, taxes go up — everyone assumes it’s going to kill the economy… but remember government spending is also going to go up significantly,” he said. “Net-net, it’s a much better result than people are thinking.”

The team at Parker Associates and PTC Computer Solutions follows the latest news and information in the industry so that we can stay on top of the changes that will affect your industry. There are many factors that are reliant on the economy and what is happening in the market both locally and globally. This affects the consumer market and the positioning. We have a time tested method of success in helping businesses with marketing and product positioning.

Parker Associates bases product positioning on specific consumer preferences from current surveys and focus groups published by industry periodicals and reports, or direct consumer interaction designed and carried out by Parker Associates experts and contractors. Along with the tremendous support of PTC Computer Solutions and their team of experts in handling research and data, we are sure about our results. It is too important for guesswork or client opinions. Give us a call at 904-992-9888 or email us at info@parkerassociates.com if your prefer. We are always at the ready.